Today is Memorial Day and there will be flags flying, hot dogs grilling and chicken frying, parades and brass bands. Formerly this day was known as Decoration Day and relatives and friends of those who died in the Civil War to World War I would gather at cemeteries to honor those who had given their lives in the service of their country. In November we honor those who served their country with military service. On the last Monday in May we honor those who gave their lives in service to their country. Don't overlook the women who served their country from the Civil War to the present. They served and died in service to their country. She Served Too. There were civilian volunteers in Vietnam and one was a woman I tried to get information about, but nothing yet, is Eleanor Ardel Vietti. She was taken prisoner on May 30, 1962 while at a leprosarium near the South Vietnamese mountain town of Banmethuot where she was a physician.

A national moment of remembrance takes place at 3 p.m. local time on Memorial Day. Another tradition is to fly the flag of the United States at half-staff from dawn until noon local time. Volunteers often place American flags on each grave site at National Cemeteries.

The rules for flying the flag of the United States of America are listed on this website:Flag Code. If you don't know or aren't sure please check the Betsy Ross website. The code and rules for flying our flag and every contingency that might ever arise is covered there. After September 11, 2001 we put up our flag...and it just didn't look quite right. That is when I found the Betsy Ross website. It is a mission of mine to help others not make mistakes with the symbol of our country.
Members of the Veterans of Foreign Wars take donations for poppies in the days leading up to Memorial Day; the poppy's significance to Memorial Day is the result of the John McCrae poem "In Flanders Fields." gatherings, and sporting events.
Source-Wikipedia

The poem In Flanders Field was written by John McCrae, a Canadian doctor, soldier and poet.

In Flanders Fields
In Flanders fields the poppies blow
Between the crosses, row on row,
That mark our place; and in the sky
The larks, still bravely singing, fly
Scarce heard amid the guns below.

We are the Dead. Short days ago
We lived, felt dawn, saw sunset glow,
Loved, and were loved, and now we lie
In Flanders fields.

Take up our quarrel with the foe:
To you from failing hands we throw
The torch; be yours to hold it high.
If ye break faith with us who die
We shall not sleep, though poppies grow
In Flanders fields.

During World War I, John McCrae was tending the wounded and dying in the trenches at the Second Battle of Ypres in the Flanders area of Belgium as the Canadians held their ground against chlorine gas attacks. When a close friend was killed and buried in a quick grave marked with a plain wooden cross, John McCrae wrote In Flanders Fields. 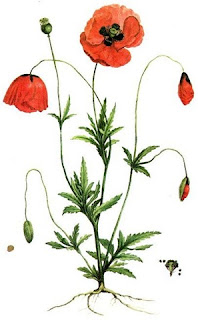 God Bless Our Soldiers in harm's way today and forever.

During the Mother's Day festivities I wasn't feeling very well, but I just opened this in an email and it cracked me up. I'm sure small children didn't answer these questions, but they might have. There are some really smart little guys out there. I hope you enjoy this as much as I did.

WHY GOD MADE MOMS

Answers given by 2nd grade school children to the following questions:

Why did God make mothers?

1. She's the only one who knows where the scotch tape is.

2.. Mostly to clean the house.

3. To help us out of there when we were getting born.


How did God make mothers?

2. Magic plus super powers and a lot of stirring.

3. God made my mom just the same like he made me. He just used bigger parts.


What ingredients are mothers made of?

1. God makes mothers out of clouds and angel hair and everything nice in the world and one dab of mean.

2. They had to get their start from men's bones. Then they mostly use string, I think.


Why did God give you your mother and not some other mom?

2. God knew she likes me a lot more than other people's mom like me.


What kind of a little girl was your mom?

1. My mom has always been my mom and none of that other stuff.

2. I don't know because I wasn't there, but my guess would be pretty bossy.

What did mom need to know about dad before she married him?

2. She had to know his background. Like is he a crook? Does he get drunk on beer?


Why did your mom marry your dad?

1.. My dad makes the best spaghetti in the world. And my mom eats a lot

2. She got too old to do anything else with him.

3. My grandma says that mom didn't have her thinking cap on.


Who's the boss at your house?

1. Mom doesn't want to be boss, but she has to because dad's such a goof ball.

2. Mom. You can tell by room inspection. She sees the stuff under the bed.

3. I guess mom is, but only because she has a lot more to do than dad.


What's the difference between moms and dads?

2. Moms know how to talk to teachers without scaring them..

3. Dads are taller and stronger, but moms have all the real power 'cause that's who you got to ask if you want to sleep over at your friends.


4. Moms have magic, they make you feel better without medicine.

What does your mom do in her spare time?

2. To hear her tell it, she pays bills all day long.


What would it take to make your mom perfect?

1. On the inside she's already perfect. Outside, I think some kind of plastic sur gery .


If you could change one thing about your mom, what would it be?

1. She has this weird thing about me keeping my room clean. I'd get rid of that.

2. I'd make my mom smarter.. Then she would know it was my sister who did it not me.

3. I would like for her to get rid of those invisible eyes on the back of her head.

WHEN YOU STOP LAUGHING -- SEND IT ON TO OTHER MOTHERS, GRANDMOTHERS, AND AUNTS.....and anyone else who has anything to do with kids or just needs a good laugh!!!
Posted by Amber Star at 6:10 PM 5 comments:

The days are going by and each day I feel a little better mostly. My husband and I are going to get signed up for diabetes classes so I can figure this mess out and my husband can know what the heck is going on with me if I do something wrong medicinewise.

We have been getting plants tidied up in their pots from the overwintering time in the greenhouse. I hadn't been able to fuss with anything in a while and didn't know why I felt so weak.

Hubby has been so good in caring for me. We are both learning the carb count on most all of our food, but it is limited. One of the finest things I'd forgotten about is Cream of Wheat and adding some frozen fruit in it, and they have made oatmeal so good I can't believe it! I made some pecan encrusted "fried chicken" the other day for dinner and enough for lunches and snacks for me. Sugar is way over rated anyway. The substitutes are tasty and fill the void when it comes to needing sweet stuff. I love the sugar free stuff you put in a bottle of cold water for a change.

There is a lot of learning going on around here regarding the steroid induced diabetes that I'm living with right now. When they are able to reduce the steroids the diabetes will, hopefully, go away. So far it hasn't been too bad, but it is getting more complicated.

Take care all you kind friends who have dropped by and left messages on my blog or emailed me. It really means a lot to me to hear from you and what is going on in your part of the world.

It is supposed to start raining here and hopefully it won't be as dreadful as it has been in Oklahoma for them, but there will be a LOT of rain in store. Our daughter is coming up to Ft. Worth this weekend to attend an annual party. This year will be particularly difficult since we have lost two others from our "gang". Life goes on, thank Goodness. I found while I was so sick that I really did not like the idea of dying at all. There is way too much to see, read, learn, and experience. However, right now it is sort of scary to think of going very far from home. That will get better as my body heals....I hope!
Posted by Amber Star at 11:09 AM 6 comments:

Back In The Saddle....well, not so much

I got home from the hospital today after a week of so much not fun. I've been trying to catch up on a few things and hope this blog now will let you post to my blog again. I've got to get in the bed now. Will try to catch up soon.
Posted by Amber Star at 12:11 AM 10 comments: