These past few weeks have been full of work and fun.  We went to the Hill Country and had returned the last time I posted.  Promised pics, but haven't had time.  There has been so much to do.

During one of our spring deluges water came into the house and the carpet in our bedroom had to be replaced.  It has now been a couple of weeks and we finally made a decision just last Saturday.  It will still be a couple of weeks before it is installed.  We have a lot of large furniture, and thank goodness they will move it for us...and move it back, too.  Another +

Also, we have moved forward and got my husband's folks home on the market as of yesterday.  The real estate agent had an open house and there were a number of inquiries.  We worked really hard getting it ready to show.  Thankfully the estate sale got all the furniture and stuff out.  We had the carpet taken up.  It was ages old and worn out...it wasn't pretty either.  However, when the carpet came up there were some weird brown spots on the floor.  From the pictures it looked like the carpet pad had come to pieces and stuck to the wood floor.  When we got over there it turned out to be spots of dried mud.  I spent the most of a day on the floor with a damp cloth getting it off.  The only thing I can figure is my father in law "cleaned" the carpet in the traffic areas, and got it plenty wet.  The wood wasn't warped, though.  After a final cleaning with Bruce floor cleaner it looked pretty good. 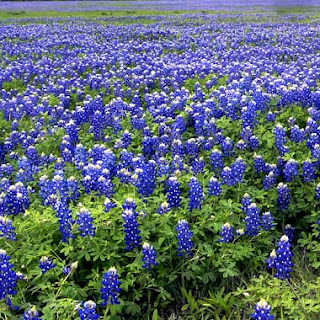 We've b﻿een working on the small house they owned next door, too.  I'd hoped to get it on the market at the same time as the big house, but it didn't work out.  I'll get the things still in it out tomorrow.  There is a storage building out back of that house that has an interesting story.  A long time ago the fellow who owned the house decided it would be his road to fame/fortune to raise chincillas.  He built a cinder block house with windows and air conditioning.  It didn't work out and he didn't make a fortune but to this day it is still called the chincilla house in our family.  Anyway, the chincilla house has collected a great number of random items, and the air conditioner is long gone.  I sure wish it was cooler, but it isn't.
Posted by Amber Star at 12:39 PM 7 comments:

Happy Easter with its promise of new beginnings

Posted by Amber Star at 1:54 PM No comments:

We Are Back Home And We Are Fine

We were so lucky today I can't believe it.  There were terrible tornadoes this afternoon in Texas that destroyed so many homes.  However, the good part is no deaths have been reported as of the 10pm news just now .

We have been in the Hill Country around Austin for a few days to look at the spectacular display of wildflowers this year.  The flowers lived up to all the talk and were unbelievably beautiful. There were some that looked like white poppies. I don't know what they are called. The bluebonnets were gorgeous drifts of blue with white flowers mingled in with them. But, we have been glued to the TV all afternoon so no pictures downloaded yet.  There was film of trailers that attach to semi tractors and weigh 16,000 pounds were picked up by the tornado and thrown through the air!  It was amazing.  A grandmother saved her grandson by holding onto his feet as they sheltered in the bathtub with two other children.  The tornado was pulling at the boy but the grandmother hung on to him.  That was a story with a happy ending.  I'll bet he has a bit of a problem with going to the bathroom alone for oh probably the rest of his life.

We don't have basements like other parts of the United States.  We have heavy clay soil and they make the foundations very weak.  That is what I've been told.  I'd love to have a shelter dug in our backyard, but really I'd love one in the garage so we could get to it from the house.

While we were driving we'd had XM radio on and hadn't heard a thing about the weather. The news this morning in Marble Falls didn't say a word about this kind of severe weather up in the DFW area.  Close to home we stopped in a small town to buy gasoline. There was a radio on in the gas station and I thought I heard a weather alert. I asked where they were talking about and she said Ft. Worth, Arlington and Cleburne, where she lives.  After we got back on the road I texted my sister and cousin to see how bad it was up in Ft. Worth.  They told me to be very careful and to wait about 30 minutes so the weather would have moved out of the area.  I got a local station on the radio and, oh my there were tornadoes everywhere.  There were about 4 on the ground at once.  We had been blissfully ignorant on our way home.  I don't remember ever having a tornado in Ft. Worth before the year 2000 when there was one downtown.  There was something about the twin forks of the Trinity River and an Indian saying that because of the convergence of the forks that would save us from destruction.  It made sense to me all my life and for sure we hadn't had a tornado.  Not so much anymore, and our city fathers are going to chang the course of the Trinity so it will be all "so nice" and sort of like San Antonio's riverwalk.  Don't get me started on that nonsense.  San Antonio has underground springs and we live in a drought area.  Politics!

Anyway, just wanted to let you know we are OK and our home is all in one piece, thank heavens.  I'm going to get a good night's sleep and see about the pictures tomorrow.  Also, the disposable camera will have to be taken down to get the pictures.  When we went out searching for wildflowers a week or so ago we forgot to get the digital so bought a disposable one at the drugstore.

The Hill Country is such a beautiful part of Texas, and y'all know how much I love my state.  I just don't seem to know how to keep it to myself.

Hope all of you are well and safely in your homes with loved ones and all that.