Drummond's Bar began construction on expansion of their building to increase their business. In response, the local Baptist Church started a campaign to block the bar from expanding with petitions and prayers.

Work progressed right up until the week before the grand reopening when lightning struck the bar and it burned to the ground!

After the bar burning to the ground by a lightning strike, the church folks were
rather smug in their outlook, bragging about "the power of prayer", until the
bar owner sued the church on the grounds that the church . . ."was ultimately
responsible for the demise of his building, either through direct or indirect
actions or means."

In its reply to the court, the church vehemently denied all responsibility or any
connection to the building's demise.

The judge read through the plaintiff's complaint and the defendant's reply,
and at the opening hearing he commented………

"I don't know how I'm going to decide this, but it appears from the paperwork
that we have a bar owner who believes in the power of prayer, and an entire church congregation that now does not."


True Story
Another odd thing happened last night that involved my rx medication for rheumatoid arthritis. I had gotten confused about when to take it and asked my doc when I was
there last week. He told me one pill in the morning and one at night. I said okie doke and yesterday morning I took my pill. Last night I had several pill bottles of other meds on the night stand and to be sure I had the right medication I read the label it said, "Take 5 tablets by mouth every Monday." That was alarming to say the least, so I got out the bottle from the last prescription and it said, "Take 2 tablets by mouth on Monday morning and evening only every week." I'm seriously thinking of changing pharmacies.

This morning I'd been reading an email from Kroger, a grocery story around here, and they had a little game with it, so I played. Then I was offered a whole bunch of coupons so I checked them to get them to print. My husband brought my laptop in the office to print them and this printed.

Did Someone Lose a Cat? 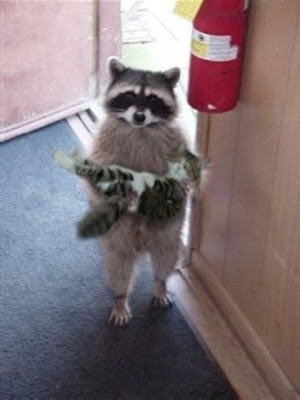 "Until one has loved an animal, part of their soul remains unawakened."

I'm pretty sure it is going to be one of "those" days...all day long.