We are going out this afternoon to look for wildflowers.  This is supposed to be a banner year for them.  It was such a hot dry year last year the wildlower experts weren't sure what was going to happen.  It was an exceptionally hot and dry summer and fall last year.

Hope to be  back later with pretty flower pictures.  I'd told my husband about this pretty one I'd seen in a construction area where I figured there would not be any wildflowers.  The news just said it is called "bastard cabbage" and is taking over in Texas.  It has dense low growing foliage that shades out other wildflowers.  It is a real problem and from that article sounds like it is as much fun as kudzu is in other parts of the country. 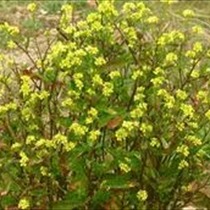 On another note I thought I'd found an answer to the broken back and my love for ironed sheets. While stopping for a Subway sandwich one afternoon I saw the cleaners down a couple of doors away. When I asked if they did sheets and they said yes. The cost was about $11, she thought and that was what it was with the first set of queen size sheets I took in. I'd gotten behind on ironing the durn things because it is such a hassle to iron a king size sheet (sort of like ironing a circus tent), and the kids had been here recently so there were more than just ours to get caught up. When I went to pick up some queen size yesterday they told me it would be $39!?! They had no idea why, but only charged the $11 it had been before. I don't know what to do, but to try to get an firm estimate from them and other cleaners before taking them in. None of the websites have a listing for prices for dry cleaning or laundry. It is a market they could probably optimize if they were smart.  Maybe it is a continuation of the discrimination against women.  It costs much more for a woman to get a shirt laundered than a man and I have no idea why.  That stinks!