The Squirrels In My Life

It is a cold rainy day in Texas, and this afternoon I thought it time to post some of the pictures I've talked about in the past.  My husband  is one character I'd promised, but got busy and the pictures are on another computer I don't use that much these days.  Here he is: 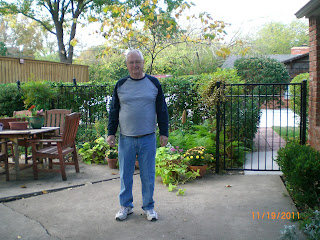 He is my one true love, and is the best man I've ever known. Which is a good thing since we are married.
I see the sweet potato plants were still thriving on this date in the middle of November.﻿ They perished with the first freeze.  We didn't have a freeze this year until late.  There are a bunch of dianthus in the flower bed and some in a pot by the backdoor.  I saw they were blooming like everything when I came in from meeting with my knitting group last night.  Most times we leave through the garage and I miss the action by the backdoor.  I'm finding there are a number of cooler weather plants that flourish around here.  The ornamental cabbages are so pretty now, too.  However, I digress.
Another thing I'd said I'd post about was the squirrels and their feeders.  They have entertained both of us so much, and anyone who is here while they are eating.  However, when we came home from Houston from visiting with our daughter over Thanksgiving the bird feeder had been savaged and was tilted over and nothing left to eat.
My cousin had told me she had bought a squirrel feeder and they just loved it so much and her squirrels didn't bother her bird feeder at all.  I was skeptical, because we have had squirrel invasions in the past on the bird feeders.  This fall we bought a new bird feeder and a squirrel feeder, too.  The one for the squirrels is mounted on the tree with a hinged lid the squirrel has to lift to get to the feed. 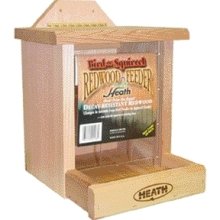 I found one very similar to this one at WalMart and we put it up on a sweet gum tree by the rock garden.  The Plexiglas front, on ours, can be turned over so the feed will run out onto the wooden tray via a cutout in the "glass", if we decide it would be better as a bird feeder.  It was out on the sweet gum tree for a good long while before the squirrels figured the thing out.  When I looked at it the other day while filling it the top has been gnawed and the top of the Plexiglas, too.  Looks to me that if the little thing figured out the flip top box part it would have gone on for the corn and seeds in it.
The "bird feeder" is closer to the house and pretty much anymore the birds eat the seed from under the tree or on the patio.  There is rarely any in the feeder for long.  "Gordo" the squirrel, my name for "him", will keep at the bird feeder until there is nothing left in it.  He is an acrobat, too.  Below he is stretched out from the tree trunk to the bird feeder and he then goes back to a sitting position to eat the seeds in the comfort of the fork of the tree.

Even though these squirrels are a pain at times, they have kept us laughing at them.  One day there was a young squirrel that was much smaller than the two or more adults. It got into the box of the squirrel feeder and was eating away in peace. One of the larger squirrels came to get a snack and sat on top of the box. The little one sat up causing the larger one to move up with the lid. This went on for a while before the older or at least larger one left. Probably to come up to the easier feeder. The one on the gum tree farther out in the yard makes a clacking noise when the squirrel is opening and letting the lid fall after he gets the corn and seeds from it. I'm sure my neighbors are so happy we bought this thing. Either that or they are wondering what on earth that clacking noise is. It will go away when it gets to be warmer and the food supply for the squirrels is abundant again. The neighbors will think it is some sort of a new winter phenomenon.﻿
﻿﻿﻿
Posted by Amber Star at 3:30 PM