Finally Things Are Looking Up a Bit

FINALLY my hubby was able to talk to the doctor..one of three who care for the hospital patients. I don't know what has happened at our hospitals, but I don't like it that much. Anyway, what she said is when my mil came into the hospital her coumadin level was extremely high. It is supposed to be 2.4ish and hers was 9. That means her blood was VERY VERY thin. It had pooled in her feet, with one being more swollen than the other. We had thought about that, but thought both would have been equally swollen. Her primary doc had put her on coumadin after she had a blood clot in her leg about a year and a half ago. She also had a bit of a sinus infection...that was what the cat scan of her head was about. When they examined her, one side of her head was tender where the sinuses are located.

Today she has discovered the phone. She has only called twice so far today. We requested she not have a phone in her room at the memory care place. That is what they call where she lives now. She was driving us insane calling all the time before she left home. We had the phone over there turned off today. We need to get over there and empty the fridge. That is going to be a rough thing to do to start clearing out the house, but they will never be able to go back to live there alone.

I guess my mil will be dismissed sometime today. My husband is going to get the transfer bus they have at the memory care place to pick her up. I told him if she gets in my car she won't get out.

Anyway that is the the saga of my mil. We got away yesterday afternoon for a bit to go to the movies. Half price day there on Wednesday. We saw Avatar. I'd wanted to see it, but, I especially wanted to see it after the Pope nearly had a fit when he saw the movie. It is probably banned. Spokesmen said it was drawing people away from the church and into nature worship. Whatever. If something is banned I will break my neck to see it or read it. So many books have been banned for no good reason. There is not that much to them. I'm just taking it for granted pornography is banned, and that is something I think should be banned, and you know what I do know it when I see it. Wasn't that the criteria for determining porn.

My very sweet husband picked up "Julie and Julia" for me today when he went to the grocery store. I've wanted to see the movie since it came out at the movies, but we had our hands so full with his mother and dad we never were able to get away during that time.

The cold from the bad place is finally turning the corner on getting better. I'm not well, but better today. When we went to the movie yesterday I took a bag of cough drops and tried not to share a cough with anyone. That was successful. There weren't too many people in the theater on a Wednesday afternoon. Avatar is a movie best seen on the big screen in the 3-D version with the cool glasses that aren't like the old cardboard ones. It isn't the very best deep thinking movie I've ever seen, but it was a pleasant movie for a cloudy cool afternoon.

Also, today is delurking day. Many times people read our blogs and don't comment whether good or not...I prefer good..btw. So, delurk yourselves and post a little note if you are out there. Sometimes I think there aren't so many people reading my stuff. I saw this on Fever just now and decided to see if anyone is out there I don't know about. 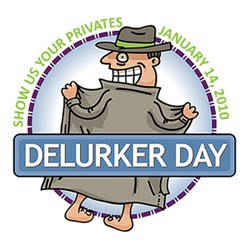