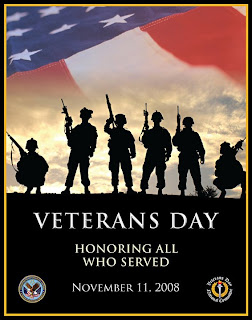 This graphic came from the Department of Veterans Affairs and is linked to that site. There is a tremendous amount of information there.

November 11th is Veterans Day here in the United States. It is a time to honor all the men and women who have served their country with military service. They go where they are sent and do not complain, but complete their missions sometimes under enormous stresses.

World War I ended on November 11, 1918. On the same date three years later an unknown soldier from that war was buried at Arlington National Cemetery. November 11 eventually became the date when America honors all who have served the United States in war.

On Memorial Day we honor those who did not come back from war on Veterans Day we honor all who have served their country.

The Flower of Rememberance

In Flanders fields the poppies blow

Between the crosses, row on row,

That mark our place; and in the sky

Scarce heard amid the guns below.

We are the dead. Short days ago

Loved, and were loved, and now we lie

Take up our quarrel with the foe:

To you from failing hands we throw

The torch; be yours to hold it high.

If ye break faith with us who die

We shall not sleep, though poppies grow

This was the poem written by World War I Colonel John McCrae, a surgeon with Canada 's First Brigade Artillery. It expressed McCrae's grief over the "row on row" of graves of soldiers who had died on Flanders' battlefields, located in a region of western Belgium and northern France. The poem presented a striking image of the bright red flowers blooming among the rows of white crosses and became a rallying cry to all who fought in the First World War. The first printed version of it reportedly was in December 1915, in the British magazine Punch.

The paper poppies of my childhood were made by disabled veterans providing a steady supply of the flowers for sale and meaningful work for the veterans. The money earned from the sale of the poppies went to help veterans and the families.

All gave some and some gave all.

Thank you for protecting our country so I can sleep well at night.

For all our servicemen and women who are far from home on these holidays. Whatever religion or beliefs they may hold, their dedication to keeping our country safe is a blessing and gift to all of those of us who are able to celebrate the holidays with family and friends.
God bless and keep all of us from harm.