We have been watching the Golden Globes and man we have got to start spending a lot of time in movie theaters. I so want to see "Slumdog Millionaire" on the big screen and I'll have to go to Arlington to see it at the theater where it is still showing. I've told you guys about my fascination with Bollywood. There are so many movies I hadn't known anything about, so we must get busy.

Kate Winslet just won her third GG! What a year for her!!

Soon it will be time to start planting and now is the time to start planning the garden. I'm planting all the tomatoes I can get in the ground and in the greenhouse. During Christmas my sister had some extra Campari tomatoes she gave us, small globes of total goodness. After the festivities there were some, a couple of boxes, left. One day I roasted them in the oven at 200 degrees for 8 hours with a bit of olive oil and oregano and OMG they are the most delicious, intensely flavored tomatoes ever. I put all the tomatoes we had to bring in when it was going to freeze that were still green. They had gone ahead and ripened against all expectation, so in they went as well. They have been so wonderful on toasted bread rubbed with roasted garlic. Shopping at more "ethnic" grocery stores lately has the benefit of being able to purchase garlic at 10 heads for $1. That is a very good deal. Tonight we had spaghetti and since I can't eat meat I bought plain marinara sauce and added some of the roasted tomatoes. It was so delicious I didn't want to quit, but I was satisfied. Maybe, something that is truly fabulous tasting doesn't need more than just some at a meal. Now you know my passion for all things tomato. On my birthday that was the best dish we cooked...well, those weren't cooked. My daughter and I bought some Comparis at Sam's and some heirlooms at Central Market along with some little mozzarella cheeses and the whole thing drizzled with a bit of balsamic vinegar...yummy! Those were better than the steaks that were very delicious that night.

The meatless diet has been recent...since the gout thing started right before Christmas. I can have small amounts from time to time, but figure if I can go without meat my other issues will get better. Milk and cheese is a good source for protein. And every now and again beans and corn. That combination makes a complete protein that is hard to get on a true vegetarian diet. But the tomato bed planning is going to begin in earnest this week. I can get some cold weather crops in by Valentines and have some fresh lettuce, green onions, and peas, but once it warms up some they are goners. Here is a picture of some of our turnips I planted last August or September. Little lavender globes of tasty goodness on winter days with a pan of cornbread. I could have planted some more of them this month for another crop, but they would interfere with the lettuce and peas. This year I'm going to plant some runner beans, too. I haven't done that in ages. hmm...we may need another little bed. Good thing I picked up that sharp shooter spade down at Mike's nursery when they had a sale the other day. That is another story about which shovel is the best, but needless to say I love a good sharp shooter. 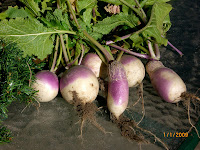 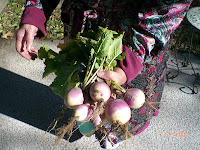 I'm rambling and not making a lot of sense while watching the tv and being glad for Mickey Rourk that he won the Golden Globe for "Wrestler", even while wondering if he understands what he has regained making a comeback from turning his back on Hollywood for many years and hitting rock bottom with the drinking and drugs. It is another one on my extensive list of movies now. Marisa Tomei plays in it as well.

It has been a slow weekend. My hand has been hurting again and now I have some fever. Enough of my whining though. Time to make an appointment with a rhuematologist and be done with this and get some good treatment.

Oh yes...we were talking this weekend about maybe taking a driving trip on Route 66 from Amarillo to wherever we wear out. I don't think we should try to navigate Las Angeles. Not exactly globe trotting, but would be an interesting vacation I think. We did a bit of research on the internet. I don't want to be in the desert during the summer, so we were thinking spring. If anyone has knowledge about New Mexico, Arizona, and California in the spring any input would be appreciated. We have gone to New Mexico in July and it was still cool in the mountains. Guess I won't get to Kentucky this spring after all. I'd wanted to go that way to check out some of the yarn shops we saw when we were in Arkansas, and some in Missouri and Tennessee on another trip.

Oh yes, if you have time stop by Judy's blog, The Other Side of the Hill, to read her post about natural highs. She is a natural high herself and I really enjoyed reading the comments about what people do that takes them to a higher plane.