More About the Visit With Bossy

Finally I'm back without a million things to do. It has been a busy week here on our Lane. (If you listen to Garrison Keillor you will get the outright plagiarism going on). My cousin and I went to Dallas to meet up with Bossy and her friends. You were promised something...oh yes....pictures of the stained glass windows. They were truly a sight to behold! 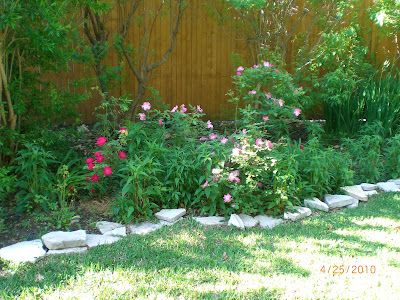 Well, clearly this isn't what I was looking for....this is a picture of our back flowerbed. 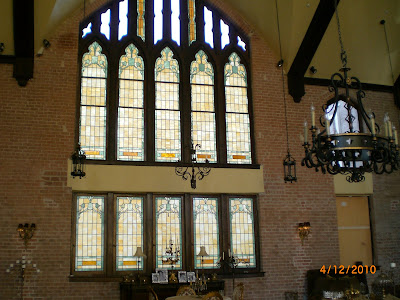 This is one of the many stained glass windows. Our hostess has in the past made and taught stained glass making, so she knows without a doubt, a great deal on the subject. Their home is beautiful. When we first got there everyone was speaking in a very low voice...like your church voice...not you, Melli. *grin* I know you are praising the Lord to high heaven! 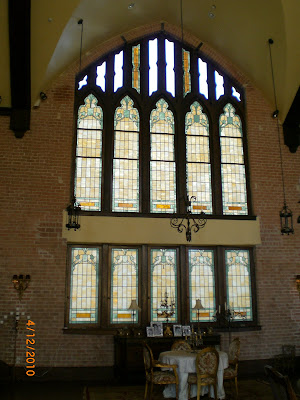 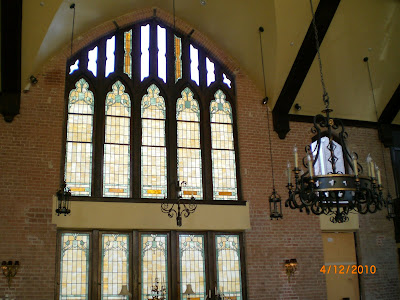 In fact this may be different shots of the same window. I just don't remember. It was all so beautiful. On one side there was a small round table and on the other a very long table with many chairs, but the windows were the same. 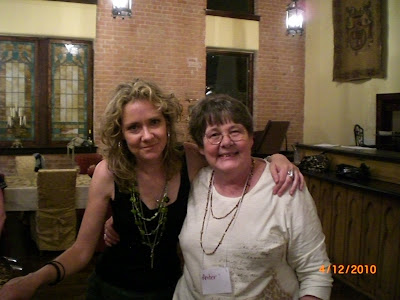 I hadn't realized how old I'm getting, until I sat for this picture of Bossy and me. ps...she really isn't Bossy at all, you know. She has a very sweet temperament and is patient to a fault. We, my cousin and I, got there early...*gasp*...you can only imagine how we felt, but we were put at ease by Bossy, who had arrived just before we did, and our hostess and her helpers. Oh yes, they didn't get my badge correctly spelled. They just stopped at Amber, guessing I either didn't want my last name known to anyone or that it just didn't matter. I borrowed a pen and put an * after my Amber to make Amber*. Dangit...is my name! I have to concede that in a certain phase of the negotiations early on I did say that my cousin and I might not be ready to disclose everything with everyone, but dang it is a psyeudonym anyway! 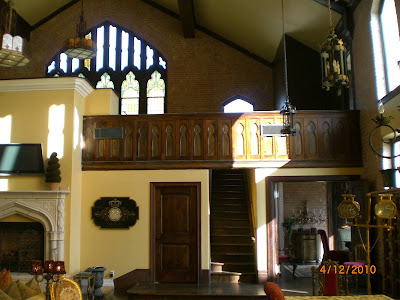 This used to be the choir loft, but it is something else now. I didn't go up to check it out, however; I did comment that the reason people quit attending church possibly was related to stairs, aching feet/knees, and something else probably involving broken hips and such. And I didn't have one thing alcoholic to drink. Oh, speaking of that, when the margaritas started flowing so did the conversation. It was nice to have twenty or more women at the table yakking their heads off about blogging and people asking "Oh, 'You are Peel Me A Grape'!" "Love your blog, girl!".
The young woman across the table from me didn't understand it at all. I didn't understand how she had missed it, but told her what I knew, which my blogging is not a novel or a treatise on any subject. It is a journal of how I feel about a certain subject today. She seemed to understand "Stream Of Consciousness", so that was good. Sort of got me wondering if she is a journalist trying to figure out the world of blogging. There are pictures if you don't speak my language...mostly Texan. Sometimes it is from the bad place when I get mad and sometimes can be understood by everyone by my body language, but then you can't see that over the monitor, thank goodness. This blog is never going to win a Pulitzer prize or anything for that matter. It is just fun to me...except when the computer gets hosed up and I'm ready to take an axe to it. *giving it a knowing look* It has already started with me today, and she knows it! She is pointing in the direction of the den where the laptop is residing today. Yeah right!
On the opposite side of the sanctuary/family room there was a wonderfully well equipped kitchen where the altar used to be. Going up the matching stairs a la the choir loft on the other side, I came to two conclusions, one is that stairs are not good for my knees and, 2. she had some lovely jewelry making class stuff up there.
As I said before the week from the bad place came, they got take out fajitas and they were good. Added plus was there were very few dishes to be washed. Actually none for me, because I sort of disappeared about that time.
I do want you to see this picture before you leave. 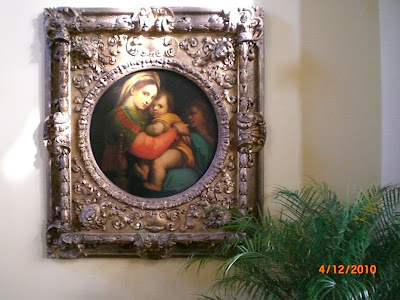 The walls were painted a very soft gold. The sun shining through the windows on the wall changed the colors on the wall and in the picture. It was very beautiful, and I hope I had the flash on my camera turned off. I nearly got thrown in the carcel in Cuernavaca for taking pictures of the murals Diego Rivera painted...oh a long time ago. The museum guy told me in no uncertain terms to turn off my flash! It would eventually, with all the gringos coming and taking pictures, fade the colors. Comprende? and there was a harsh look on his face. He turned to leave and I thought I had the flash off, but at that moment I took another picture...you have to understand how powerful his, Diego's, murals are. I thought he was coming to get me for sure. But I showed him I couldn't turn the flash off. Also, just fyi, if you are ever in a submarine and want to take a picture of the fish swimming past and you have a throw away camera...hold your hand over the flash part or you will get a swell picture of yourself in the glass. Just things I've picked up on the road of life.
I won't bother you with anymore about the house and how fabulous it is and will tell you about the drive to and from Dallas with my cousin. We should never be allowed in a car together alone. There is absolutely too much laughing going on! We got lost..ok.
Also, fyi...we had a great time! Thanks for the memories. I'll send a note as soon as I can find out her name and where to send the note.
Posted by Amber Star at 10:36 AM