Sea tales from Port A

Ok..ok...I got confused about the dates and all yesterday, which was Wednesday here, Quilly. Wednesday is close to Tuesday and I haven't been able to get back on track since we went to Port A. We went down on Sunday and came home on Thursday and that has had my days messed up ever since. I didn't want to leave, but we had business here that needed tending to.

We uploaded some pictures yesterday, but Photobucket was slow as molasses in January. I finally gave up and got hubby to upload some while I knitted and then he gave it back to me. We both finally gave up. I'll try it again another day.

This is on the deck of our condo while we were down there. I loved this place. We were right on the water and could sit outside and hear the surf, gulls, and peace. There was a kitchen and downstairs there was an area with bbq grills and I gotta tell ya, I still got it when it comes to lighting coals for grilling. We had steak from the Island Grocery the first night we were there with roasted potatoes, and sliced tomatoes. It was a fabulous meal. I really prefer to have a place where I can cook, especially breakfast. I hate getting up and going out in the morning. We did go out for dinner twice, but went to the same place and had fish tacos both times. They were very good. I bought fish and stuff to make them this weekend here.

Hubby was pretty good at the grilling part after I got the fire going. It was one of those bags that says "Light these tabs and come back in 15 minutes to a lovely fire and lit coals". Well, that wasn't the truth at all...as you might have guessed. I cleared out the floorboard of the car for

scrap paper and got some cardboard from the trunk. My husband is odd about the weird things we have in the trunk, but at least the cardboard was helpful and got the fire going well. When the coals were about right...2 beers, then I went up to finish the meal. We had bought some beer bread in West, Tx, a Czech community on the way down.

We both could not believe how blue the water was and it was very clear, too. Usually the Gulf is muddy, because it is shallow around shore. This time it was so beautiful. It was pretty calm while we were there, espcially the first day we were there.

This was our view from our balcony and that is hubby out there surf fishing all alone. I'm pretty sure it doesn't get much better than this. We only had three days, but they were great. 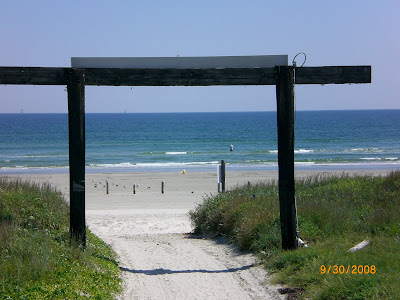