I found the post that was believed lost. It was still on another computer.

Posted by AmberStar at 3:20 PM 0 comments

Today has been a lazy day of naps and not doing very much at all. We had a good time last night with family and friends while having a few drinks and eating some hamburgers. Even the weather wasn't so hot and humid...not cool by any means but not a furnace either. My cousin was telling me last night about how she is going to build a greenhouse from some old windows she salvaged. I thought that was such a great idea I can hardly wait to see it. She has a garden pool and is very interested in dragonflies. She sent a picture today of a nymph and they are pretty fierce looking things at that stage. 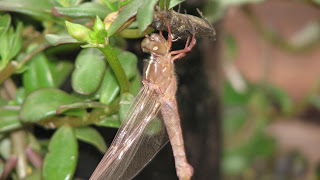 Later tonight I was watching a rerun of "The Unit" a television show about a military group. The leader uses the name of Snake Doctor when they are in the field. That got me thinking about snake doctors I'd seen when I was little. When I looked it up, I believe that what we in Texas call a snake doctor is what others call a damsel fly. 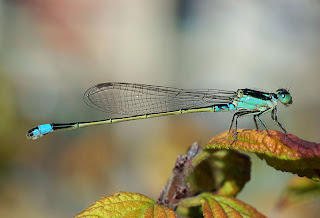 This site Dragonflies and Damselflies shows the difference between the two. I remember lazy days while fishing with my dad and watching the snake doctors hanging on a blade of grass in the water or on a turtle. I didn't like turtles very much, especially after I caught one and got it up on the dock and my dad had to get the hook out of it. It chashed me and my dad laughed. He said he thoght I was going to jump in the water to get away from it. Those were some of my favorite times with him. He and my step mother would go to a small lake that had a lot of snakes in it, too. I thought that probably wasn't the best place to fish, but what did I know...I was five years old, for goodness sakes. Frances, my stepmother would pack a nice picnic that we would eat on the dock in between catching turtles, and watching the dragonflies and snake doctors.
That is probably one of those things that folks now say should have caused me to have some horrible mental problems or probably should have caused me to die or something. I'm not sure how I managed to grow up sort of sensible or how my kids managed to make it to adulthood, either....but we did.
Anyway, it was a quiet day here at the house and a good day for remembering. My cousin brought me a star gazer lilly, too. One of her first ones to bloom this year. That brought back a lot of memories about my dad, too. That is a story for another day, though.
Posted by AmberStar at 8:33 PM
Labels: random thoughts
Posted by Amber Star at 10:10 PM