Today was a totally random day

For some reason I was just worn out today and spent the afternoon on the sofa getting caught up with a whole lot of shows we had Tivoed. Gosh...even Tivo is now a verb. Anyway, I got caught up with "Firefly", a sci-fi show I really liked. I googled it and found out there are only 14 episodes and it didn't really make it because Fox sort of showed the episodes out of sequence, which would confuse a lot of people. I thought it had been on for years, because I guess I've been seeing the same ones over and over at random. I was just looking for the times and on what channel it was showing so I could set up the Tivo when I found out this startling fact. The random thing about that is the ship in Firefly is a renegade ship of the Serenity series. That must have been in the back of my mind when I chose this blogging adventure. I'm not as wild about sci-fi as say, Dr. John, but I've seen a lot of it and read a lot of it in my life. I'll not be entering the Liars Club contest, though.

After getting caught up on a lot of shows it was nap time and then dinner time. We branched out into "exotic", for us, cuisine. We roasted a chicken on one of those things like a beer can and put herbs de Provence on the chicken. Wow! I made rice with roasted peanuts and currants...well, I didn't have currants, which are only little bitty raisins, but I did have some raisins and some craisins even. Sliced some of our home grown tomatoes and steamed some green peas. It was a really good dinner and there is plenty of leftovers for tomorrow.

I think I'm caught up on rest now and hope to sleep well tonight. I have an appointment in the morning and haven't had to get up early in a long time now....ever since I quit/retired from my job last November. 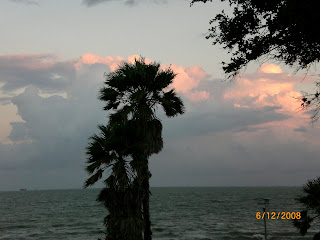 This picture was taken from our daughter's house at sundown. If he could have found the camera just a few minutes quicker it was even more beautiful. I like it anyway. It is a fitting end to this day.
Posted by Amber Star at 9:05 PM