As The Day Goes

This has been one of those days...you know..the kind that cause you to wonder what in the Karmic universe has come unspooled on your personal umbilical cord to the great Mother of everything. It got my husband, too. We are both so gun shy right now that whenever the phone rings we pretty much do rock, paper, scissors, lizard, Spock, a variation of the game as played on "The Big Bang Theory", over who has to answer it. Its been like this all weekend, but just has reached a fever pitch this afternoon. Even my husband's aunt who lives in Maryland called to inquire about her brother...my husband's dad. There is no good news around here today...just weirdness abounding.

You can quit reading right here if just having a weird day is all you needed to know, or if you are brave enough to soldier on with us keep reading.

The day started well enough and I had such high hopes of possibly going to the movie or even just a short drive in the country for relaxation, but that was not to last long. My husband went over to his folks to make breakfast for them. During the week there is a lady we have hired who comes in to make breakfast, help with baths, cleaning....the regular things, and we love her because she is good at what she does and there is no longer a cat hair carpet everywhere. Also, my husband was hoping to be over there when the yard guy was mowing to be able to pay him and to come by our house to give us an estimate for mowing our yard, too. He missed Pedro, the yardman, and had been home about 10 minutes when his mother called hyterical because his dad had gone back to bed and...was just laying there. My fil had told my husband he just wasn't feeling very well today when he was there cooking breakfast. Going back to bed is just something one does not do in my husband's family. I guess if you were dying it might be ok, but nothing less than that. I cannot tell you how many times I've had to explain myself if I went back to bed and she found out about it. Hubbs tried to find out what was going on and asked her to get the portable phone so he could talk with his dad to try to figure out what was going on. She couldn't remember where the portable was even though he told her every time she came back to the land line. It is funny if it weren't so serious. Finally he left to go back over there, then she finally found the portable. Since I was the only one here, I talked to him about how he was feeling. I was sort of gentle with him, because everyone was really tense. I asked him if his chest hurt or if he was having trouble breathing...things that might be truly serious. He told me he gets dizzy and he was a little achey. At that time my mil found the land line again and chimed in with her two cents. Then she didn't hang the phones up so my phone would not work. I called hubby on my cell to let him know what I'd learned. A couple of minutes later my mil called me to say there was a man outside mowing their yard, at that time my husband walked in their door. This time Pedro was there cutting their grass. There is a language problem with Pedro who speaks Spanish and my husband speaks English...the in laws speak gibberish...and I know some Spanish, but am very rusty. In fact I was thinking how to phrase the request for an estimate for cutting our grass (huésped). Good thing I checked on spanishdict.com, because if I hadn't I might have asked him how much he would charge to "cut our guest"(césped) . Such a simple mistake, the words are so similar in sound and spelling. My guess is Pedro would have been very surprised at a request like that. Also, my husband had left his "cheat sheet", with his questions for Pedro, and the map to our house here. This afternoon we got our daughter, who speaks Spanish very well, to call Pedro. We are pretty sure he will be coming to our house at 6pm one day, Lord only knows when, to give an estimate and all. Glad I didn't ever talk with him. He and I can work out something with a dictionary and the computer. However, our daughter told us that Pedro is very difficult to understand and that he understands English, but doesn't speak it. I'm still wondering how my daughter speaks Spanish like a native. That is going to have to be something I worry about another day....and is probably because she has lived in the Houston area for about 25 years, has people who work for her who speak Spanish and well..nevermind.

A couple of weeks ago or more our neighbors who live behind us had a GIGANTOR shed built that towers over our 8' fence. The shed is 14' and is 5' from our fence, and apparently nobody including the contractor had a tape measure so they could puzzle this whole thing out. We had to get the information about WTF happened with that whole deal on our own dowtown at City Hall. There is a city code that says sheds can't be that close to a fence and be that tall, and they can't be taller than 12' regardless. We left a written protest with the hearing committee last Wednesday, because we were just running all over town on errands...one including the paperwork to have the in laws declared incompetent. We watched the hearing on the internet after we finally got home about 8:30 that night. The committee couldn't believe their eyes and the majority said no, but there will be another hearing on Oct. 21st. This has become a nightmare for us. I do not want to look at their shed that sits on the fence line in the back center of our property. It would lower the value of our property if we decided to move. Not so much a random whim at this point. I cannot plant trees to screen it, because of power lines above. The shrubs that are there are really good for this area since they are native plants and can endure drought....but they are deciduous and for 6 months out of the year do not have leaves. So, starting yesterday the property owner has had neighbors come by our house to try to change our mind. The owners are mad at us because of this problem and they are acting crazy as loons. And the bottom line here is they need to go back to their contractor. I keep telling everyone that comes that this is not my problem, but something the contractor should address. If I ever say it will be ok, then tacky shed is permanent.

It has reached a point that my husband, the saint, and I have gotten cross with each other today and that is just crazy. We need to stand back to back like soldiers or Spartans or one of those warrior clans to protect each other from all the nuts trying to get in our business or get us in their business. Finally we called the wicked owners of evil shed, because they had left a hateful message on our answering machine and then sent a message via a neighbor (how weird is that in conjuction with them calling the evil owners MeeMa and Paw Paw and they are not related), that we would meet with them on Monday, which threw everything into a tizzy...but finally was ok with them and the hoard of them and friends who will descend upon us. I may call some police friends to keep order while they are here. My knitting group meets at 6:30, so they had better get all they want to say said in a hurry, cuz I'm out of here and my final word is a resounding NO to the friggin' shed and to leave me the he** alone. I will be at the October hearing, because maybe we will have the in laws in a facility...or we will be in one.

Some of you have noticed that I really do like sheds, but they have to be not offensive to anyone. And the owner of the shed must be nice and kind. Otherwise they are not good neighbors or good sheds.

There was much more and it involved some binge eating on my part of various cookies and a brownie. The Emmys come on tonight, so hubby will have one tv for Cowboy football and I'll have one for the Emmys. Also, it would probably be a good idea to check my b/p too. Below is a snapshot of the situation as it stands at the moment. 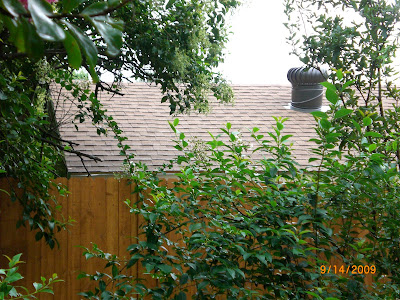 An 8' fence is really a tall fence. If you live in a home with 8' ceilings, that is how tall it is.

The fence meets code regulations for our area. Their shed does not.