My Daddy Really Was the Milkman one more time 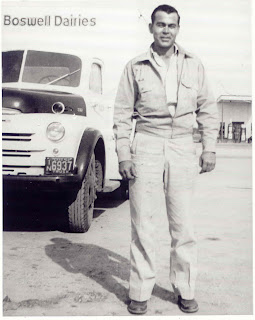 Since there is nothing new regarding my dad, I'd like to post this again. My dad was so goofy, and I will miss him now and forever.

If we have become friends since last Father's Day, now you will know why I am the way I am. I just noticed that this isn't where it used to be...last father's day. So, that is why your comments are a year old.

In the interest of “keeping it real” my dad really was the milkman.

Just found out my middle name is Dianna and not Dianne as I’d been told all my life by my mother and as it is listed on all records. I accessed my Family Tree Maker to see just how much older my dad was than my mother and found one of those little leaves that says there is more information about that person in some record. Well, this leaf was by my name and it was the official Texas birth records, by golly. It seems my dad had told me in the past…long long ago in a time that was so different that my name was Dianna…and I’d always wanted to be named Dianna…the huntress. Actually that would be Diana, but close enough. That was my private little dream. There was more that I had messed up about that whole deal…I thought Diana’s father was Zeus and she sprang fully formed from his brow, but that was Athena. Oh well. I got my dad and he wasn’t as moody as the other “gods”. My dad was hardly one of the ancient gods and I was hardly the huntress, but the bond was there all the same.

He was a different kind of guy. He was for the most part a happy man. He drove my mother to distraction while they were married and the final straw was when he used all of their leather rations during World War II for a pair of boots for her, because they would last a really long time. To clarify some…my mother was from an upper middle class family and used to nice clothes and shoes, and my father, not so much. Anyway the whole boot debacle on top of having me was just too much for her to continue with the marriage. So she obtained a divorce hoping to resume her life as it had been before, but that is another story.


My dad drank a bit…well, he drank a lot from time to time. One year he disappeared off my radar when I was just a little girl around 7 or 8 or so. He told me he had been sent to Saudi Arabia on some military mission….or oil deal, it was a big secret mission he was on. From time to time I would get letters and I always looked for the postmark from “over there”. Not sure I found anything on the envelope, though. Many, many years later after his stroke, which fortunately…or not sometimes, didn’t affect his speech, he told me he had been drinking that year and that was why he hadn’t been around.


The thing I take from that and I had been around him many times when he drank…he never got violent or mean. He laughed and told stories and I think that goes to character. He had a lot. He would from time to time run into the ditch at my grandmother’s house when he came home from a night of drinking. We could tell how drunk he had been by how far he missed the driveway the night before. All of the family lived in a two room house. I have no idea how they managed. My grandparents slept in a bed in the front room and I slept on a sofa, when I was there, in the same room as the grandparents and the other room was the kitchen. The bathroom was outside the back door…sort of like an outhouse that flushed right outside on the back porch. All I can think of is he slept in the yard on a cot or at his brother’s house next door, which wasn’t much bigger and there were more people, but I never remember him coming in at night and raising a ruckus. I knew what that was all about in my mother’s house with that set of grandparents.


Some of my happiest times with him were laying on an old Army cot in the yard looking at the sky and he would tell me about the stars. I have no idea how he knew the constellations, for he had no formal education. However, I never questioned it. I remember him telling me how he would leave school after getting there. That must have happened a lot because my mother used to tell me she would go in one door and out the other at the school. All the while telling me how she would kill me if I did such a thing. Anyway, I think my dad had what is now called ADD. He was a very intelligent man in some ways, but had difficulty learning in a formal setting. He could learn anything from a book and spent many hours in the public library not reading fiction, he made a big deal out of that. He preferred to be roaming the countryside running in the fields with my Uncle Buck. Or it just could have been he didn’t have the proper clothes to go to school. He would have been too proud to tell me that and my grandmother probably wouldn’t have thought of it. She wasn’t mother of the year ever, but was wonderful in my eyes.


During the Depression he went to a CCC camp. That was a program set up by President Roosevelt called the Civilian Conservation Corps. The CCC was established in 1933 during a very hard time for folks. He was born in 1918 and would have been 15 when The Depression started so he must have beeen during his late teens when he went to the CCC. The task was to build shelters in National Parks. He told me he really liked it and the food was good. Personally, I think my grandmother sent him to this program to keep him alive. There was very little money or jobs during that time. He was the youngest of the three children, and my grandfather had a difficult time finding work during that time. During this past year I found out that there was a salary for CCC workers. He probably sent money home to help out his parents.


He really was a milkman and before that he had a coffee delivery route. The coffee route took him up to Amarillo and up in the panhandle of Texas, I think. He told me about it once, but I wasn’t paying a whole lot of attention. He began his milkman career in home delivery and eventually advanced to a commercial route. He was very responsible, if there was a run on milk, cream, or eggnog at the grocery stores especially during the holidays he dropped everything as soon as he got the call and went to the dairy for a “hotshot”, meaning he got it out there asap. The whole family went, because it was fun and it had to be done.

It was hard work and he took me with him on the route from time to time. I was very proud to be with him when that happened. His customers would make over me and tell me what a fine guy my dad was. Probably it was my weekend to be with him and nobody could take care of me that day…again, it goes to his character about how he handled his work and life.


He joined the Army right after the attack on Pearl Harbor, but was injured during basic training by an injury to his knee from running into a screen door at the camp. It was terrible for him to have to leave and to be be 4F during the war when everyone in his unit was killed in Corregidor. He actually made up stories about being in the Pacific during the war and he may have been a civilian worker in Hawaii. I remember seeing pictures of him with some of his buddies in a tropical setting. Some of the pictures where taken on ships with guys sitting on the really big guns. I’m not at all clear about that time, because I wasn’t around yet. Some of the pictures of camp life might have been from boot camp before he was injured. Anyway, he met and married my mother and the result was me being born in 1944, so he had to have been back in Texas then. He died in 1996 and I was never really able to get the complete story of his life before he died. I wish I’d started asking sooner.

After the whole boot debacle and divorce from my mother and all he lived at home with his mother and step father, who was a very good man and my dad loved him. He named his son for him. Dad married a woman named Frances, who was nice to me and him, I guess, but that didn’t last too long. He met Mary later and after he asked me what I thought of her, he asked her to marry him. She did and they had three children. They have many more memories of him than I do…and I hope they are as happy as mine are.


He was and always will be my star gazer and those were the flowers I insisted be at his funeral. He loved life and he loved me. One can’t ask for more. 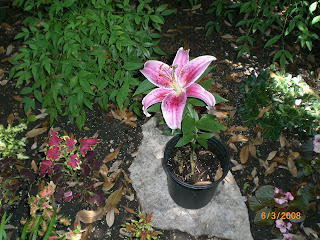 Above is a picture of a star gazer lilly my cousin brought over one night that got me thinking about all of the times I had with my dad. I'll plant it in our garden and think of him when it blooms...and probably more often. As of today, June 20, 2009 it hasn't bloomed yet. It has a bud on it, but no bloom yet. I just thought...my dad's nickname was Buddy.

Happy Fathers' Day to all the dads out there. You never know what kind of a legacy you may be leaving with your children.
Posted by Amber Star at 7:00 AM