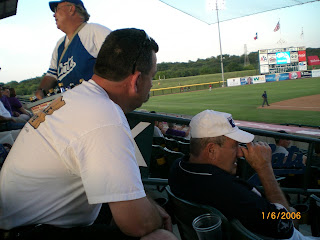 I've NO idea what is up with the date thing on my camera! Time warp of three years and six months and some change. Hmmm..

He has grown into a very good man and I'm proud to know him, as well as, being a relative to him. Cat's baseball is his very favorite thing to do. He knows a lot of people out there and that is where we celebrated his birthday. We had a hotdog tailgate party with soft drinks and chips, followed by some delicious cookies my brother in law, the chef, made for the festivities. There were cupcakes, too, but I was full by the time we got around to them. My guess is there were 50 or more guests. After we ate we were given a bag of Cracker Jacks with a ticket for the game tied to it.

The mascot for the team is called Dodger, because a very long time ago the Cats were the farm team for the Dodgers. Alas, that is no more. We do not have a major league team associated with the Cats. Dodger is really something. He wears a "furry" suit and dances, runs, and races children around the bases. Last night my brother had the opportunity to drive Dodger onto the field in an antique pickup. It was something my brother really loved. He loves going out there so much he and his wife have season tickets.
Posted by Amber Star at 11:45 AM