We are waiting for the cable guy today so have to stay close to home....they have called three or four times with an automated thing today and still not here. Anyway, I was in the kitchen where I keep the herbs to dry. I started a little herb garden after the new driveway was put in. The sage I had brought in to dry was finally and that generated a great deal of excitement around here.

I got out hubby's grandmother's molcajete (mortar and pestle) and put some of the crumbled dried leaves in it. I've had that molcajete for ages and ages and didn't have an herb garden before now. I'm keeping it busy from now on. After grinding the dried leaves the aroma was very bright and sagey and it is very sage green. Not that many leaves made a respectable amount. I've been out to the herb garden cutting more and hanging it to dry on the stairway.

I've been drying the oregano on a paper plate and just crumbling it and putting it into a baggy. I labeled it today lest anyone think it was something illegal. It is so nice having fresh herbs around the house.

I brought in some basil to have with mozzarella cheese and tomatoes for lunch. It is very tasty that way on some toasted french bread. 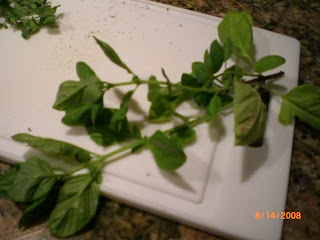 I've got some pineapple sage out in the garden that I haven't tried drying yet. I read the other day that it is very good in cream cheese on a bagel. Off to the garden now to get some.
Posted by Amber Star at 12:46 PM