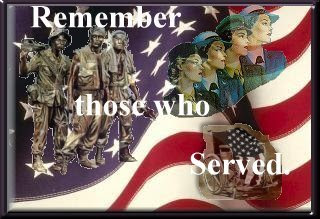 In Flanders fields the poppies blow


Between the crosses, row on row


That mark our place; and in the sky


Scarce heard amid the guns below.


We are the Dead. Short days ago


Loved, and were loved, and now we lie

Take up our quarrel with the foe:


To you from falling hands we throw


The torch; be yours to hold it high


If ye break faith with us who die


We shall not sleep, though poppies grow

You may want to visit the virtual wall-a virtual Vietnam Veterans Memorial is at that link. You can look up names of those lost, leave a memorial, or find out the MIA status of a loved one who did not return.

Those of you who have known me for a long time know that among other things I'm very patriotic and have practically been called the "Flag Nazi" for suggesting to others their flag is up WRONG! Just so you don't make this mistake that many do, you know, I'm putting a link to the Betsy Ross website where you can learn how to display the flag on any occasion at any time under any circumstance, and how to care for your flag.

Remember "She" served, too. Many forget about the nurses, doughnut dollies, and other women who served their country during times of war. Here is a webpage dedicated to those women who served, died, and came home with PTSD just like the men from the wars. Click here to see what "She" did in those wars from the Revolutionary War to the wars in these times.


Memorial Day originally honored the men who lost their lives during the Civil War, but now it also honors those from the Spanish-American War, World Wars I and II, Korea, the Vietnam War and all others.

No one really knows when or where Memorial Day was first observed, but according to tradition it originated during the Civil War. Southern women chose May 30th to decorate soldier's graves. They placed flowers on the graves of the soldiers of the Confederacy, and the Union soldier's graves as well. That is how the name Decoration Day came about. Flowers and flags are placed on the graves of servicemen. Military groups have parades and picnics follow on this day.

The above was originally written by me and published on my website at AmberStar's Place on May 8th, 2000

After the patriotic remembrance pile in the car and head to Ennis again! They are having the National Polka Fest there this weekend! It isn't far from here and it is such a quaint little town. Take a picnic along or buy corny dogs and cokes there. But, it is supposed to rain this afternoon, so get your polkaing done early.

Remember, if you drink, don't drive. It would be too much to have on your conscience if you hurt someone. And it would be a real tragedy to have to spend time in prison.